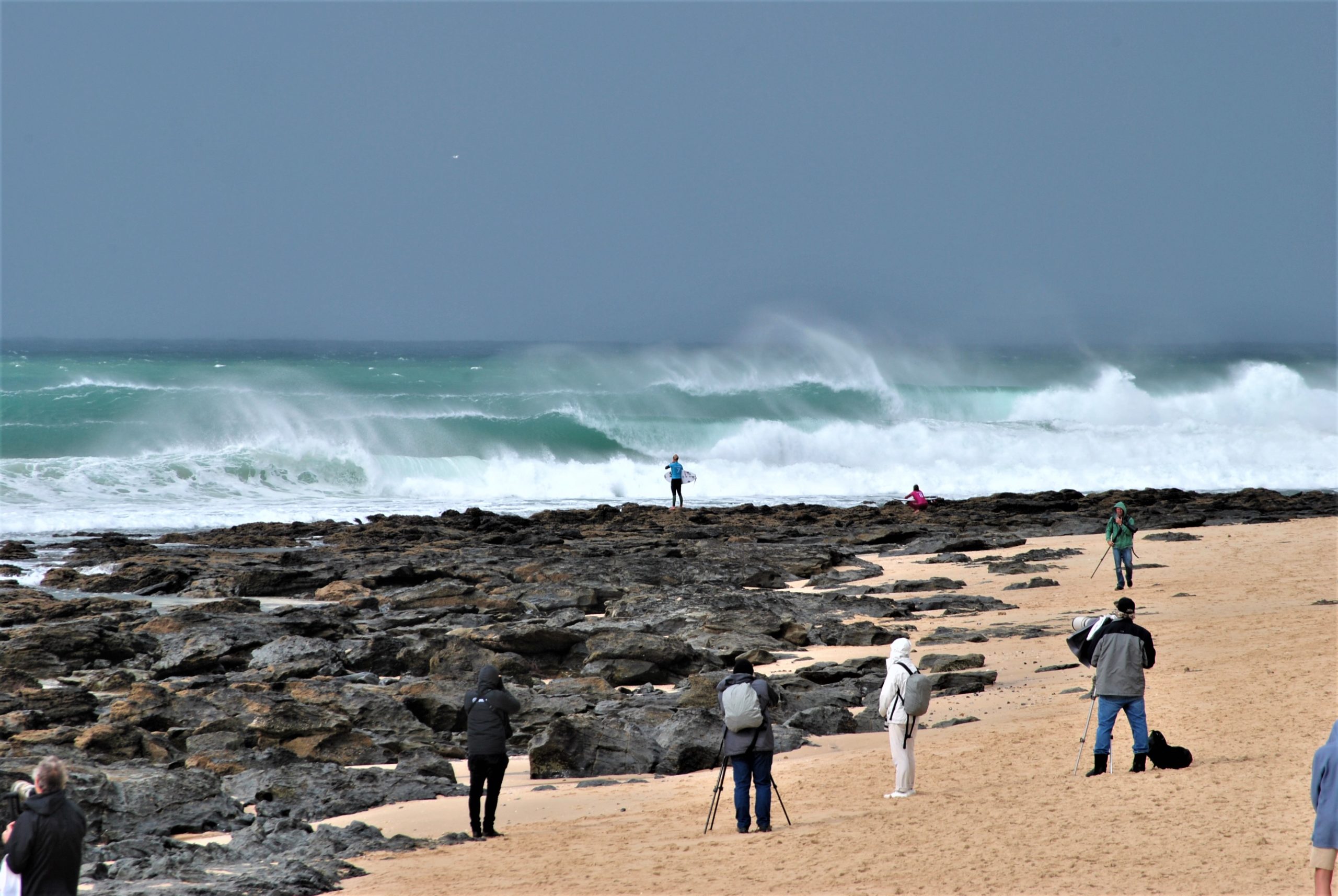 South Africa is an amazingly unique and diverse country, we are blessed to have two oceans with completely different water temperatures on either side. The fridged Atlantic which hugs the west coast and the warm Indian Ocean which gently kisses the east coast. Considering our vast coastline there is little wonder why we have so many people using the ocean for an income or recreationally. Growing up in Strandfontein the ocean was an escape from everything and one of my best childhood memories was going down to the beach with my Dad. I ran away to go and play at the beach for the first time at the age of 11 with some friends and I’m sure if my mom found out she would have killed me. The fortunate thing about growing up in Strandfontein is that there was always someone going to the beach. I started out just wanting to be in the water, later I started body surfing, then bodyboarding, then eventually surfing. After I stood up for the first time, I was hooked. Looking back at all those memories it’s easy to see why my posts are heavily influenced by the ocean and this one is not going to be any different. On this occasion, I will be heading up the east coast all the way to one of my favorite winter holiday destinations Jefferys bay.

Jeffreys bay is easily considered one of the best waves in the world and every surfer I know wants nothing more than catching one of these perfect products of nature and riding it to the best of their ability. Before I go into depth about my love/hate relationship with this wave, I would like to point out some of the highlights and beautiful stops as you are making your way from Cape Town to Jeffreys bay. There are many different ways to get to a destination; my dad always told me “You can do it quick, or you can do it right” For the purpose of this blog I’m going to show you the right way.

This is possibly one of the more underrated holiday destinations situated a short drive from the southernmost tip of Africa (Cape Agulhas) and it is often overlooked. Upon arriving you are greeted by the warm Indian ocean; at first glance, you would think that the area is just one street and a beach. I stayed in the area closest to the Arniston Hotel and spa for about 30 minutes staring at the ocean before I realized that I needed to explore a bit more. Knowing very little about the area and what it had to offer I referred to google and discovered that there was another beach as well as some caves close by and decided that it might be worth a look. I wasn’t disappointed by what I found. I’m sure that it’s pretty much the same wherever you go, the local people set about their day at the beach like every other day and have no idea about the beauty of the area they are utilizing. For a tourist like me, I was blown away. It was a beach like no other which I had seen surrounded by mountainous rock formations and caves of course. I spent more than an hour just taking photos before I eventually took a swim in the glorious warm water.

It’s not often that I have the inclination to head inland as opposed to sticking on the road closest to the ocean but in this case, I will deviate. The reason for this will be revealed on your way to Oudsthoorn. It is by far one of the most beautifully scenic mountain passes which I have ever driven on which overlooks the mountainous region. The first time I went to Oudshoorn was almost 12 years ago when I drove up the garden route for the first time, I had no idea what I was about to experience. I had heard so much about the amazing Cango Caves which stretches for a kilometer underground. It is a truly spectacular experience. This is also the region most famous for the production of Ostrich products and Ostrich farming.

Mossel bay has a deep-rooted history. Bartholomew Dias first landed here in 1488 and named the long white sandy beach after himself, as many explores of those days did. The beachfront has since become a bustling area with huge hotels, bars, and restaurants mere meters away from the soft white sand. My first experience of this beach was a bittersweet one as I was working, and the waves were absolutely firing (that’s surfer talk for really good). I watched as wave after wave was enjoyed by some of the locals. It’s still on my “to surf” and will be making a point of spending a few days here when heading up the coast.

…the cool ocean breeze on my face

I remember my first visit to Plettenberg bay like it was yesterday. Walking onto the searing hot sand, the cool ocean breeze on my face and the smell of fish and chips. My wife and I were one of 5 or 6 couples on the beach which is totally unheard of on the busy beaches we had been accustomed too. We spent almost an hour in near privacy until a bunch of school kids arrived for lifeguard training, even at that point it wasn’t crowded. We were extremely fortunate to live in one of the seaside villas which was spectacular. Another highlight for me was the nature reserve which has spectacular views, provided you are up for a little uphill walk. When I’m working I look for reasons to stop here just to relive my honeymoon even just for a few minutes.

An adventures paradise, its surrounded by activities of every kind. You can either bungee jump off the worlds highest commercial bungee jump, zip line amongst some of the oldest trees in the forest, visit the largest tree in the area, river raft, segway or for the less adventurous you can just take a hike in the beautiful nature reserve and cross the suspension bridge which straddles over the river mouth. All these activities are within 20 minutes drive of the beautiful Storms River village. I could probably go on for hours on just this little village but, I will leave the rest to your exploration and imagination

Unlike most of my friends and fellow surfers, I have not spent as much time here as I would love to. For me, surfing was something I did around the Cape Peninsula. We are spoiled for choice here and I never really had a desire to travel for surfing, in retrospect I think it was just pure ignorance. I’ve since had the opportunity to experience Jbay a few times since then. Last year however was a standout year for me as I was fortunate enough to go twice within the space of a month albeit for different reasons.

My first time was with my friends and family, we spent a few rather eventful days there. When I arrived, I was greeted by a good friend who had already been there for a few days. He quickly informed us that there had been waves all the time that he was there and that there were still some waves. Standing on the lookout point where countless surfers, professional and amateur used to assess the conditions,

I remember being overexcited and a bit nervous …

I remember being overexcited and a bit nervous as it was a bit bigger than I had ever surfed it and I could tell that there were some really good surfers out there. For the remainder of our trip, we had some really good waves, unfortunately, I was not performing at my best and I knew that I was not mentally in it after an incident I had. I eventually went further down the coast and caught some fun waves. On the surfing front, I was not having the best time but for me the actual highlight was the awesome time spent with friends and family, the kids skateboarding, playing with them on the beach and of course shopping at the surf shops for some bargains.

Later that month I was fortunate enough to head up to accompany some guests for the annual International Surf competition. I was really fortunate as my international guests were all somehow involved in the surfing industry which was a kind of culture shock for me. I had never really spent time with this many people who were so embroidered in the fabric of the professional surfing industry, as a result of this I was able to meet some of my heroes and even get a selfie with 2-time world champion Gabriel Medina. I was also mentored by professional surf photographer Joli photos, this I think was the most valuable for me. I learned so much about surf photography during this time and will be forever grateful. In addition, he shared some of his stories on his adventures of chasing swells with some of the biggest surfers in the industry surfing some of the biggest waves.

In conclusion, I know that there are loads of local people out there reading this and thinking I think he missed a few places. This is the beauty of the garden route, I’ve been driving up there for work for years and even longer for personal pleasure yet I have not seen everything. Furthermore, I have been to places which I have not mentioned here. I did this purposefully, not because I did not like these places or because they are not beautiful enough, I did this because I would need a book for everything, and I haven’t stopped exploring…yet.